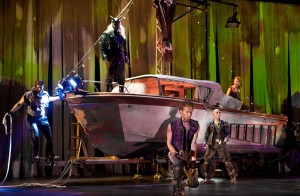 To a casual observer, there might not seem to be much mileage in combining Kurt Weill’s dark-hued “Mahagonny Songspiel” with “The Breasts of Tiresias,” Francis Poulenc’s breathlessly lighthearted jape about sex, folly and procreation. But one of the many splendiferous strokes in the double bill presented over the weekend by Opera Parallèle was to see how tellingly these two pieces could be fit together.

Sunday afternoon’s performance – the last of three at the Yerba Buena Center for the Arts – was a small miracle of theatrical inventiveness and musical delight. And it demonstrated yet again why this company, led by Artistic Director and Conductor Nicole Paiement along with her husband, stage director Brian Staufenbiel, has quickly become one of the Bay Area’s most indispensable artistic assets.

Even though Paiement has insisted, with some legitimacy, that both scores share an interest in vernacular music – Weimar-era jazz for Weill, the Parisian music hall for Poulenc – the truth is that these one-act operas are worlds apart in their outlook.

“Mahagonny,” with a characteristically scabrous libretto by Bertolt Brecht, is a spare black comedy in song, about the search for the mythical city of the title. “Tiresias,” though it has a glimmer of a serious undercurrent about the need for France to repopulate in the wake of war, largely takes its cue from the cheery surrealism of Apollinaire’s play.

Staufenbiel’s production melds the two in a single witty and inventive stroke. He sets “Mahagonny” in a futuristic dystopia, in which overpopulation and ecological disaster have left the world an arid wasteland. (In a magnificent opening, magazine covers and newspaper fronts from this late 21st century setting are projected on a screen for the audience’s uneasy delectation.) 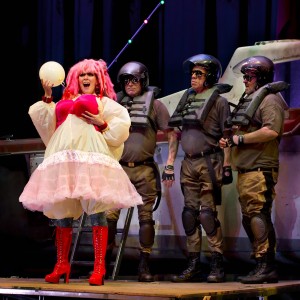 The searching frontiersmen of “Mahagonny” – the bluntly named Billy, Bobby, Bessie and so on – are a troupe of traveling performers dragging a wheeled boat through the sands. And “Tiresias,” done on a little portable stage like some “Mad Max” version of “Pagliacci,” becomes an opera within an opera, a cautionary fable about how the world got this way.

Staufenbiel’s concept instantly turns the contrast between the two works into something poignant and rich. The breathless high jinks of Poulenc’s score, which could so easily cloy on their own, become deeply affecting against the backdrop of an apocalypse; when the show is over and the performers part from their audience to return to their weary, thirsty trek, the sadness is devastating.

The staging, with spare, nimble sets by Dave Dunning and costumes by Christine Crook, was beautifully efficient, and Paiement led a performance of tact and precision – grimly taut in the Weill, and full of charm and rhythmic exuberance in the Poulenc.

Out of a superb ensemble cast, perhaps the finest singing was delivered by soprano Rachel Schutz. She brought lyricism and cogency to the Weill songs and a vivacious spirit to the role of Therèse, the feminist who switches genders to become the title character in the Poulenc.

But her colleagues were scarcely less successful, including tenor Thomas Glenn, mezzo-soprano Renée Rapier and a passel of fine baritones – Daniel Cilli, Gabriel Preisser, Aleksey Bogdanov and Hadleigh Adams – who took on a series of roles not always worth the trouble of telling apart. The Chorus held up its end marvelously, and members of the San Francisco Girls Chorus were on hand to make the delights of child rearing seem perfectly evident.