Opera Parallele’s Nicole Paiement is conducting The Crucible at the Glimmerglass Festival in New York this summer! Opening night on Saturday, July 23 received a beautiful review in the New York Times: 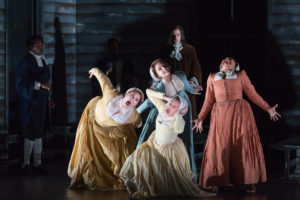 “Ward’s score adds simmering tension, with strings that seem to vibrate with worry while insinuating like rumors. There are no self-contained arias; the unforced lyricism of the vocal writing keeps pushing forward. And unlike so much contemporary opera in English, the music doesn’t distort the natural emphases of speech.

Conducted with fierce energy by Nicole Paiement — a gorgeous performance that dipped into lushness without ever losing focus — the cast, much of it drawn from Glimmerglass’s distinguished (and refreshingly diverse) young artist program, was superb. Among many fine singing actors, a few highlights: Brian Mulligan’s passionate, desperate Proctor; Ariana Wehr’s penetrating, scary Abigail; and Helena Brown’s heartfelt Rebecca Nurse. The mezzo-soprano Jamie Barton, whose voice is majestically plush yet somehow always articulate, even conversational, made much of Elizabeth’s hurt and dignity.”

Read the entire review of Sweeney Todd (which opened on the same night) and The Crucible.