Paiement conducts Turn of the Screw at Dallas

Our own Nicole Paiement conducted Britten’s Turn of the Screw last weekend as the Principal Guest Conductor at Dallas Opera. Read two fantastic reviews about the Maestro and the production. 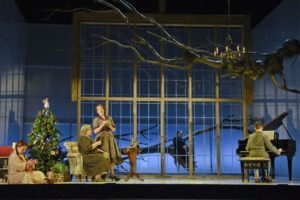 “Friday night’s Dallas Opera performance, at the Winspear Opera House, was high-stakes theater, the kind that sends the occasional chill down your back, makes you grip the armrest, even squirm a bit. A chamber opera scored for just six singers and 13 instrumentalists, it got a visually arresting production (from the Glyndebourne Festival), some stunning singing and magically evocative playing from members of the Dallas Opera Orchestra. On a high podium, principal guest conductor Nicole Paiement shaped the music with a flawless balance of precision and evocation.” 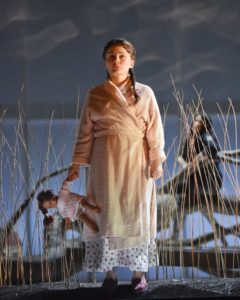 “A major part of the success of this production (the first time Dallas Opera has done this title) is Principal Guest Conductor Nicole Paiement. She had a score, and occasionally turned a page, but I rarely noticed her looking at it. This opera is permanently fixed in her musical DNA, and every phrase, if only just a few notes, were perfectly shaped. The opera is scored for a chamber orchestra of only 13 players. On many occasions, the already small orchestration drops down to a few instruments playing, and occasionally, Britten only uses a single instrument. However, you don’t notice the reduced orchestra in her hands. More players would have just been in her way as she cast an eerie musical spell over the proceedings.”