Opera Parallèle in the Community

Opera Parallèle in the Community 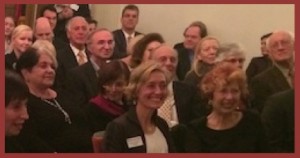 Opera Parallèle is fearless, it seems to me.  How was it that the still relatively small, but unquestionably mighty Opera Parallèle was hosted on February 27th by the German Consul General  Peter Rothen and his wife Mrs. Gerlind Rothen  at the German Consulate, among high ranking officials from the consular community representing Belgium, France, India, Madagascar and Mexico?  What brought out the Honorable Sally Lieber to speak so passionately and with such elegant conviction? OP is taking on Anya17, the new Adam Gorb / Ben Kaye opera that counts among its public supporters not only an astonishing array of international musical talent but also the United Nations.  Anya17 is about the horror, dislocation, and dehumanizing brutality of modern day slavery and sex trafficking.  The title’s grim implication is just the beginning – a name that is not her name, which is not a name at all, but is instead a number. I recall sitting with Nicole Paiement and Brian Staufenbiel as they described their vision for this production and their desire to swiftly mobilize both OP’s inner circle and the many communities that could be touched by this work, to make sure San Francisco had the opportunity to offer the US premiere of this groundbreaking opera.  San Francisco, where the United Nations charter was signed; San Francisco, hallowed ground for progressive social values and ground zero for countless critically important global humanitarian efforts ; San Francisco, where the reality of human trafficking is all around us, hidden from view.

This moving event on February  27th was the launch of a series of events designed by our Community Task Force  to support the Anya17 production, and to bring focus in many public forums to the topic of human trafficking.  Our Task Force has been lead by the incomparable Nancy Goldberg.  Nancy’s work as co-chair of the San Francisco Coalition Against Human Trafficking is exemplary in itself, but taken in context with her years of service for humanitarian causes and social welfare, her good work runs incredibly deep in our community. She’s truly an institution and she is simply impossible not to like. Nancy’s presence has grounded our efforts and helped to gather a fabulous group of stakeholders: Antonia Balkaska Lavine, Davidson Bidwell-Waite, Edwin Waite, Larry Siegel, myself, and OP leadership Nicole Paiement and Tod Brody.

With the warm welcome and gracious support of the German Consul General and his family and staff, a program was presented consisting of addresses from Consul General Peter Rothen, The Honorable Sally Lieber, California State Assembly (retired), Dina Smith, Director of Programs at the SAGE Project, Nancy Goldberg, Chair of the Anya17 Task Force, and a group of extraordinary young artists from the San Francisco Conservatory of Music who performed brief selections from the opera with vivid support and descriptions of the framing context from Nicole Paiement and Brian Staufenbiel.  The singing from Crystal Kim, Mariya Kaganskaya, and Andres Ramirez was exquisite, the complex nature of their characters’ situations made all the more palpable by the very youth of the singers themselves.

Just as one can never truly recount the power of a musical moment in words, one cannot recount any more powerfully the telling of a survivor’s story. Dina Smith bravely and with incredible poise and commitment to the whole truth, told her story of being trafficked, which left all in the room astonished at her incredible transformation of personal tragedy into compassion and service. Each of us experienced first-hand how we might have thought it impossible that someone of her circumstances and achievement, at the moment she was trafficked, could ever fall into that situation. Dina caused us all to understand how something as simple as one missed phone call or one missing resource at a moment of danger can cause the foundation of one’s very safety to crack. The Honorable Sally Lieber discussed her long road and her profound successes with legislation around human trafficking, but it was when she listed the kinds of groups who are at high risk, particularly undocumented women, that many of us realized for the first time – this is not somewhere else, this is here.

If you are receiving Parallèle Voice, I’m assuming you will be joining us for the opera this June, and you probably already know what fulfillment awaits you at an OP performance.  That said, I hope you will join us for at least one of the upcoming events preparing our community for Anya17, and in so doing that you will come to know one or several of the partnering organizations represented by the membership of the Task Force, that work in service of survivors or at a policy level to stop human trafficking.

Art is possibly the greatest catalyst for social change known to humankind.  This timely opera speaks to an often voiceless issue, and sings into our lives, inspiring a tremendous need to take action. This is a work that takes enormous risks and requires enormous resources – there is plenty of time to get involved! We on the Task Force and everyone involved with this important work of art welcome your investment, your care, your interest, and your commitment to making this happen.