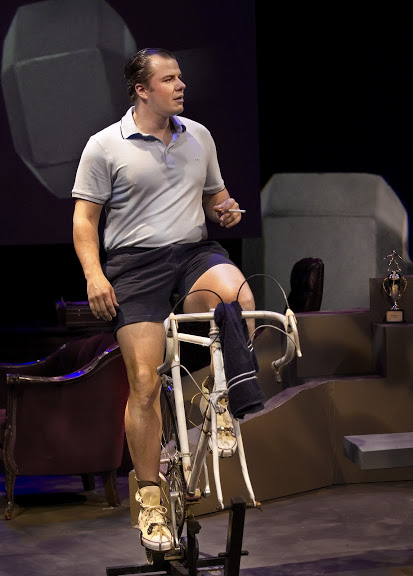 The edgy intensity that Brancoveanu brought to Orphée two years ago has grown exponentially with the passage of time, bursting forth to bring an explosive Sam, priapically strutting the stage.

Some works linger around the edges of your consciousness days after the show closes.  The energy continues to pulsate, the issues seek resolution, and ultimately, only the memory remains. That such an impact could be made by a plot about quarreling couples – subject matter that is uncomfortable at best and boring at worst – speaks to the strength of the work itself and the extraordinary talents of those bringing it to life.

Opera Paralléle’s take on Samuel Barber’s “A Hand of Bridge” and Leonard Bernstein’s “Trouble in Tahiti” is one such production. Billed as “where Madmen meets opera,” the two works remain edgy and vital 60 years after they were written.

“A Hand of Bridge” takes on the internal monologues of two suburban couples playing cards. Bill (Andrew Ramirez) indulges in sweeping, harmonious raptures of Cymbaline and other fantasy mistresses. David (Eugene Brancoveanu) sings of “20 naked boys, 20 naked girls, attending to my pleasures,” and great wealth (“if I were rich as Morgan”). Geraldine (Lisa Chavez) pines “do not die mother” and laments her unsatisfactory relationship with her deceased mother. Sally, obsessively repeats “I want buy that hat of peacock feathers” with a dementedly narcissistic atonal intensity. The disjointed arias of each are connected by a smoky jazz riff that accompanies the bidding of the players and the playing of the game