Our own Artistic Director of Opera Parallèle is featured in Opera News, focusing on her recent post as principal guest conductor at Dallas Opera.  Read more about Maestra Paiement’s musical career, and her work in Dallas where she is currently conducting Everest.

MATTHEW SIGMAN talks to one of opera’s most adventurous spirits, conductor Nicole Paiement, who leads the world premiere of Everest this month at Dallas Opera. 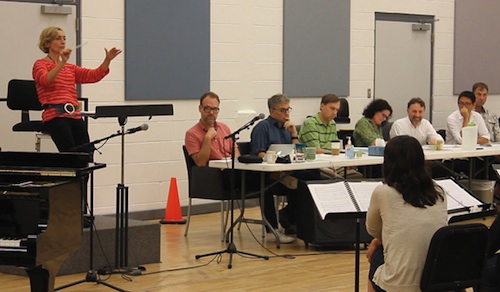 The conductor at a workshop for Everest at Dallas Opera.
© Luke McKenzie, Dallas Opera 2015

Nicole Paiement, the French–Canadian conductor who has emerged as a leading exponent of contemporary opera, is the ne plus ultra of her hyphenated heritage. An intellectual in the European tradition, admired for her meticulous preparation of complex scores and ability to contextualize them in a socio-political vernacular, she is also an unabashed adventurer, a pioneer eager to explore the most forbidding American musical topography. With equal élan, she can unearth operatic gems (Lou Harrison’s Young Caesar), redefine classics (a chamber version ofWozzeck) and scale new heights: this season she leads the premiere of Joby Talbot and Gene Scheer’s Everest at Dallas Opera, where she was recently named principal guest conductor. Her roots now extend to the San Francisco Conservatory of Music, where she is artistic director of BluePrint, a contemporary-music series, and holds the Deléage Chair in new music.

In an era in which opera has become a director’s medium, Paiement stands out as the rara avis — a visionary conductor who shapes new works from score to stage, and who, unlike peripatetic conductors eager to fill their resumés with name-dropping gigs, is happy to stay home and cultivate her exotic musical garden, Opera Parallèle.

“If I want Opera Parallèle to become part of the artistic fabric of San Francisco, then I need to be part of that community as well,” she says. “I need to be available. It may not be about conducting or fundraising. It may be a symposium that’s not even about opera. It’s about developing an audience.”