Open Rehearsal: “Nothing Short of Spectacular!”

From the Artistic Team and Cast: 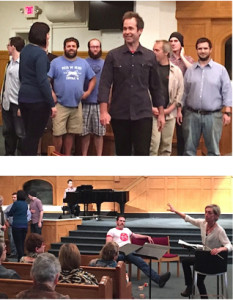 Above: Brian Staufenbiel, Creative Director and Laura Anderson, Staging Manager, work with the chorus of inmates.
Below: Nicole Paiement addresses the audience after rehearsing a scene with Michael Mayes (playing Joseph De Rocher).

Conductor Nicole Paiement on setting effective tempos: “We have to be very careful in some places. The music is so lyrical but if you go too slowly, it becomes sentimental. And that is not the story.”

This is not a sentimental opera.

Director Brian Staufenbiel informed an already deeply moved audience of the visual effects that will happen onstage and the audience reacted with a collective gasp.

You will be in awe of the staging.

Michael Mayes (Joseph De Rocher) and Jennifer Rivera (Sister Helen) spoke about the challenges of playing very difficult emotional characters, and how to balance the gravity and emotional weight of the role while still being able to sing.

You will leave knowing the deeply personal stories of unforgettable characters.

An audience member announced that she attended and loved the premiere 15 years ago, but was especially struck by how deeply moving the story became in the intimacy of a smaller space.

There’s not a bad seat in the house.

Another audience member mentioned how many times he had traveled to see the production and how thrilled he was that it is back in San Francisco.

It’s happening this weekend in our city!

This production is not to be missed!
Get your tickets to this weekend’s performance!