OP’s Hackathon was a success

The winning Hackathon team with the five judges

On June 12-13, Opera Parallèle hosted a Hackathon at the Impact Hub San Francisco. The goal was to create an original, immersive theatrical experience for OP’s upcoming production of Peter Maxwell Davies’ The Lighthouse. 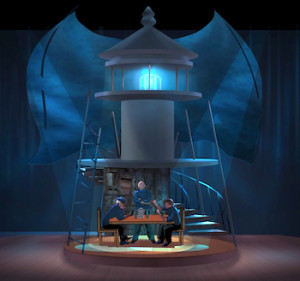 The event was a success, with 6 teams presenting very creative ideas for the production of The Lighthouse. The judges, Nicole Paiement, Brian Staufenbiel, Elly Jessop Nattinger (Google Experience Engineer and MIT media lab Opera of the future), Daniel Knapp (SFOpera Director of Production), and Ge Wang (Stanford Professor and Founder of Smule), decided on a winning team, Owen Parry and Robin O’Connor, who will get to work with the OP Artistic Team throughout the production process. Their idea was a suite of concepts for increasing the sensory impact of the opera. This included a proposal for performers to serve as part of the scenic design (blowing salt spray into the audience, or fanning the cold sea air in their direction), and even a method for transmitting salt and sea scents into the audience. The OP production team will be working with them to develop and translate some of their concepts into the final production of The Lighthouse.