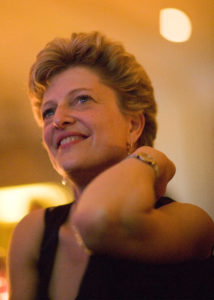 CAREY PERLOFF is a director, writer and producer who has served as Artistic Director of the American Conservatory Theater in San Francisco since 1992. The youngest person ever chosen to lead a LORT theater, Perloff used her passion for reimagined classics, vigorous new work, intensive community engagement and rigorous actor training to reanimate A.C.T. after its home (the Geary Theater) was nearly destroyed in the 1989 earthquake and its MFA and artistic programs were threatened by significant deficits and loss of direction. Today, A.C.T. is one of the liveliest, most important and most fiscally-solvent institutions in American theater. In addition to rebuilding the Geary Theater, deepening ACT’s educational programs and producing decades of imaginative, culturally diverse programming that has seen ACT’s budget double and its work presented across the country, Perloff recently oversaw the creation of a new second stage for ACT called The Strand, a multi-venue performance space that provides a home for new artists, new work, new audiences, and the many aspects of A.C.T.’s training programs. Sitting at the vortex of the burgeoning tech sector and a neighborhood still struggling with drugs and poverty, The Strand represents one of the few bridges between competing cultures and populations in San Francisco, and has allowed A.C.T. to share space with smaller theaters and to welcome highly diverse audiences. Perloff’s book BEAUTIFUL CHAOS: A LIFE IN THE THEATER (City Lights Press 2015) explores the ideas and issues that have emerged during her tenure at A.C.T. while sharing the journey of a woman leader in a relatively male field. BEAUTIFUL CHAOS was selected as the One City One Book “Big Read” by the San Francisco Public Library and was featured in programs and discussions across the Bay Area throughout 2016.

Perloff has worked with some of America’s finest actors including Olympia Dukakis, David Strathairn, Peter Reigert, Joe Morton, Wendell Pierce, Art Malik, Bill Irwin, Anika Noni Rose, John Douglas Thompson, BD Wong and many more. She has developed relationships with major international artists such as Robert Wilson, Peter Brook, Robert Lepage, Kim Collier, Timberlake Wertenbaker, Emma Rice and Morris Panych, introducing Bay Area artists to imaginative and experimental work from around the world. Her many collaborations with Canadian theaters and artists during her tenure at A.C.T. include productions of Morris Panych’s The Overcoat, Kim Collier’s No Exit, Michel Tremblay’s Vigil, Wajdi Mouawad’s Scorched, and exchanges with the Stratford Shakespeare Festival, Theater Calgary, Canadian Stage and Vancouver Playhouse. Her interest in movement-theater and multidisciplinary work has led to deep involvement with musicians (such as the Kronos Quartet, Chanticleer, Tracy Chapman, sonic artist David Coulter, Pulitzer Prize-winning composer David Lang, cellists Teresa Wong and Madigan Shive) and dancers (such as San Francisco Ballet stars Pascal Molat and Lorena Feijoo, with whom she created The Tosca Project). She is particularly noted for her collaborations with major novelists such as Colm Toibin, Khaled Hosseni, Armistead Maupin and Lysley Tenorio, with whom she has developed acclaimed stage plays based on their prose work. A signature of her A.C.T. tenure has been the creation of “San Francisco Stories”, theater work inspired by and created for the Bay Area including Philip Kan Gotanda’s AFTER THE WAR, Lorenzo Pisoni’s HUMOR ABUSE, Lysley Tenorio’s MONSTRESS and a musical adaptation of Armistead Maupin’s TALES OF THE CITY.

Perloff’s directing work ranges from ancient drama to newly-commissioned and multi-disciplinary work. A longtime collaborator of Tom Stoppard’s, Perloff recently staged the New York premiere of Indian Ink at Roundabout Theatre Company (nominated for a Lucille Lortel Award for Best Revival) before bringing the show to A.C.T. She has collaborated with Stoppard on the West Coast premiere of The Hard Problem and the US premieres of Indian Ink and The Invention of Love, as well as seven Stoppard revivals during her A.C.T. tenure. Perloff’s most recent success was A Thousand Splendid Suns, a world premiere commissioned by Perloff, co-produced with Theater Calgary, and adapted by Ursula Rami Sarna from the best-selling novel by Khaled Hosseni. Suns will tour Canada and the US in 2018-19. Other notable A.C.T. productions also include The Orphan of Zhao (co-produced with the LaJolla Playhouse), Testament, Underneath the Lintel, Arcadia, Elektra (coproduced by the Getty Villa in Malibu), Endgame and Play, Scorched, The Homecoming, Tosca Café (co-created with choreographer Val Caniparoli; toured Canada), and Racine’s Phèdre in a coproduction with the Stratford Festival. Perloff has also directed for A.C.T. José Rivera’s Boleros for the Disenchanted; the world premieres of Philip Kan Gotanda’s After the War (A.C.T. commission) and her own adaptation (with Paul Walsh) of A Christmas Carol; Harold Pinter’s Celebration, The Room and Old Times; A.C.T.-commissioned translations/ adaptations of Hecuba, The Misanthrope, Enrico IV, Mary Stuart, Uncle Vanya, A Mother, and The Voysey Inheritance (adapted by David Mamet); the world premiere of Leslie Ayvazian’s Singer’s Boy; and major revivals of ’Tis Pity She’s a Whore, The Government Inspector, Happy End (including a critically acclaimed cast album recording), A Doll’s House, Waiting for Godot, The Three Sisters, The Threepenny Opera, The Rose Tattoo, Antigone, Creditors, Home and The Tempest. Perloff’s work for A.C.T. also includes Marie Ndiaye’s Hilda, the world premieres of Marc Blitzstein’s No for an Answer and David Lang/Mac Wellman’s The Difficulty of Crossing a Field, and the West Coast premiere of her own play The Colossus of Rhodes (Susan Smith Blackburn Award finalist). Last season Perloff directed Ibsen’s John Gabriel Borkman at the Stratford Shakespeare Festival and Fatherville, a new music-theater piece with puppeteer Basil Twist that will tour the US next season.

An award-winning playwright, Perloff recently completed Kinship which premiered in French at the Théâtre de Paris in October 2014 in a production starring Isabelle Adjani and Niels Schneider and was then produced at the Williamstown Theater Festival in 2015, starring Cynthia Nixon and directed by Jo Bonney. Her play Waiting for the Flood has received workshops at A.C.T., New York Stage and Film, and Roundabout Theatre. Higher was developed at New York Stage and Film, won the 2011 Blanche and Irving Laurie Foundation Theatre Visions Fund Award, and received its world premiere in February 2012 in San Francisco. Luminescence Dating premiered in New York at The Ensemble Studio Theatre, was coproduced by A.C.T. and Magic Theatre, and is published by Dramatists Play Service. The Colossus of Rhodes was workshopped at the O’Neill National Playwrights Conference, premiered at Lucille Lortel’s White Barn Theatre, and was produced at A.C.T. in 2003. Her newest play The Fit will be developed at Williamstown (with Bill Pullman) and at New York Stage and Film in summer 2017.

Before joining A.C.T., Perloff was artistic director of Classic Stage Company in New York, where she worked with Harold Pinter on the first New York revival of The Birthday Party and the American premiere of Mountain Language, as well as directing the world premiere of Ezra Pound’s Elektra, the American premiere of Tony Harrison’s Phaedra Britannica, and many classic works. Under Perloff’s leadership, CSC won numerous OBIE Awards, including the 1988 OBIE for artistic excellence. In 1993, she directed the world premiere of Steve Reich and Beryl Korot’s opera The Cave at the Vienna Festival, the Southbank Festival and Brooklyn Academy of Music.

As Artistic Director, Perloff has overseen three major fundraising campaigns to grow the organization’s capacity: a $30 million drive to restore the earthquake-damaged Geary Theater, the $32 million “Next Generation” campaign to provide endowment funds for A.C.T.’s future, and the $35 million Strand Theater campaign. She has worked tirelessly to advance the cause of gender parity in the American theater, co-sponsoring The Women’s Leadership Project, a $250,000 study with the Wellesley Centers for Women focusing on gender disparity in leadership and strategies for creating greater opportunities for women and people of color across the field. In her role as Artistic Director of A.C.T., Perloff has focused on diversifying the staff, artists and trustees of the organization and on encouraging new leadership opportunities and intergenerational mentorship at every level of the organization.

A recipient of France’s Chevalier de l’Ordre des Arts et des Lettres and the National Corporate Theatre Fund’s 2007 Artistic Achievement Award, Perloff received a B.A. Phi Beta Kappa in Classics and Comparative Literature from Stanford University and was a Fulbright Fellow at St. Anne’s College, Oxford, where she met her husband Anthony Giles. She received an Honorary Doctorate from the University of San Francisco in 2017. Perloff is a highly sought-after speaker in the world of arts and culture (including keynote addresses at the Aspen Festival, the National Arts Journalism Conference, Commencements at Stanford, UC Berkeley and USF and the Maynard Mack Lecture at Yale), and has published widely about theater and broader cultural issues. Perloff, who studied ancient Greek and speaks French and Italian, served on the faculty of the Tisch School of the Arts at New York University for seven years, and regularly teaches and directs in the A.C.T. Master of Fine Arts Program. Perloff is on the board of the Hermitage Artist Retreat in Sarasota, Florida, and is the proud mother of two grown children, Alexandra (a lawyer) and Nicholas (aka Wingtip), a music producer.