A very exciting announcement from the American Composers Forum: 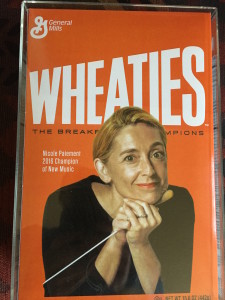 Maestra Paiement was presented with an image of herself on a box of Wheaties cereal because of her new ‘champion’ status!

The American Composers Forum (ACF) Board of Directors has voted to present its 2016 “Champion of New Music” award to four outstanding recipients: Pianist and Contemporary Chamber Ensemble founding member Gilbert Kalish; Opera Parallèle’s artistic director, conductor, and founder Nicole Paiement; new music writer, blogger and New Yorker magazine columnist Alex Ross; and conductor, pianist, composer and pedagogue Robert Spano at public ceremonies this year. The “Champion of New Music” award was established by ACF in 2005 as a national mark of recognition to honor individuals or ensembles that have made a significant contribution to the work and livelihoods of contemporary composers.