Lighthouse Reviews are In! 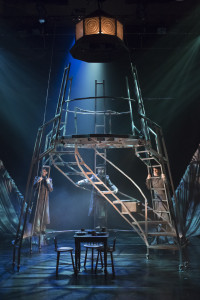 “Like many other operas, The Lighthouse ventures into the realm of the supernatural, or madness, or both. Opera Parallèle’s imaginative new production of the opera, seen at its opening on April 29, 2016, is as gripping as can be — beautifully performed and leaving audiences wondering just what happened.

Economically written for three singers and an orchestra of 13 players, this harrowing 80-minute work opens with a prologue during which three officers sent to investigate the disappearances are questioned by a court of inquiry about what they found. The three officers, played by tenor Thomas Glenn, baritone Robert Orth, and bass David Cushing, give slightly different answers to the questions. This might be mere accidents of memory, or the differences might be meaningful.” 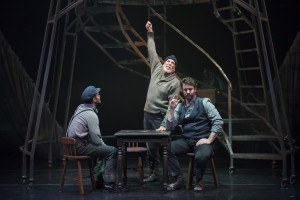 “Davies’ score is rife with unexpected turns, as irregularly unpredictable as the sound of creaking timbers on a New England whaling ship in a nor’easter, and as piercing as a lone gull’s cries. Sonically, the spare threads of this colorful score, performed by a 16-piece orchestra, serve the libretto by creating an entire world. The music hovers in air, occupying its ethereal moment in time, as much a presence as the lighthouse keepers and the foghorn, cutting through the darkness.” 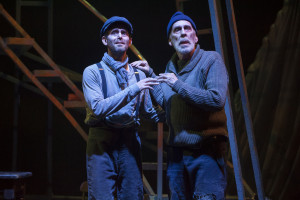 “The action in this Lighthouse is gripping from beginning to end—especially when each of the lighthouse-bound men sings a story from his past, such as Blazes’ memorable tale of murder and suicide (by way of a folk song with banjo and violin) and Arthur’s revivalist hymn. This departure from more typical operatic form is just one example of the truly creative liberties OP takes in its productions…”