Libretto by the Composer

based on the film by Jean Cocteau

A surreal new take on a 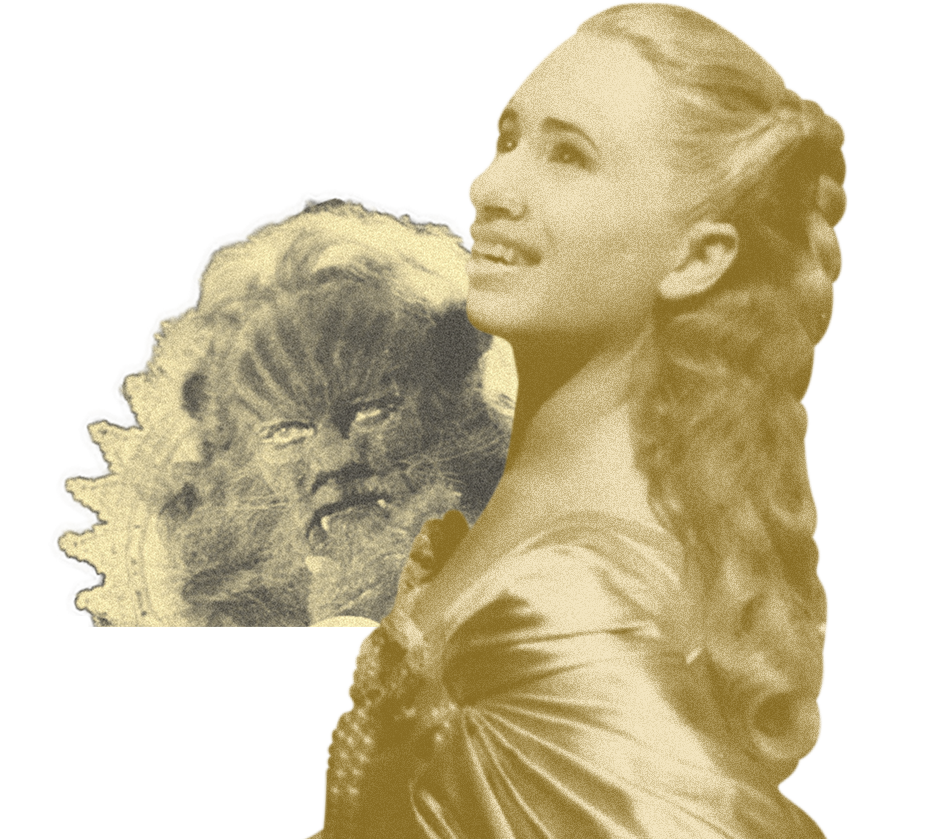 La Belle et la Bête: The Beast, the Man, and the Mask 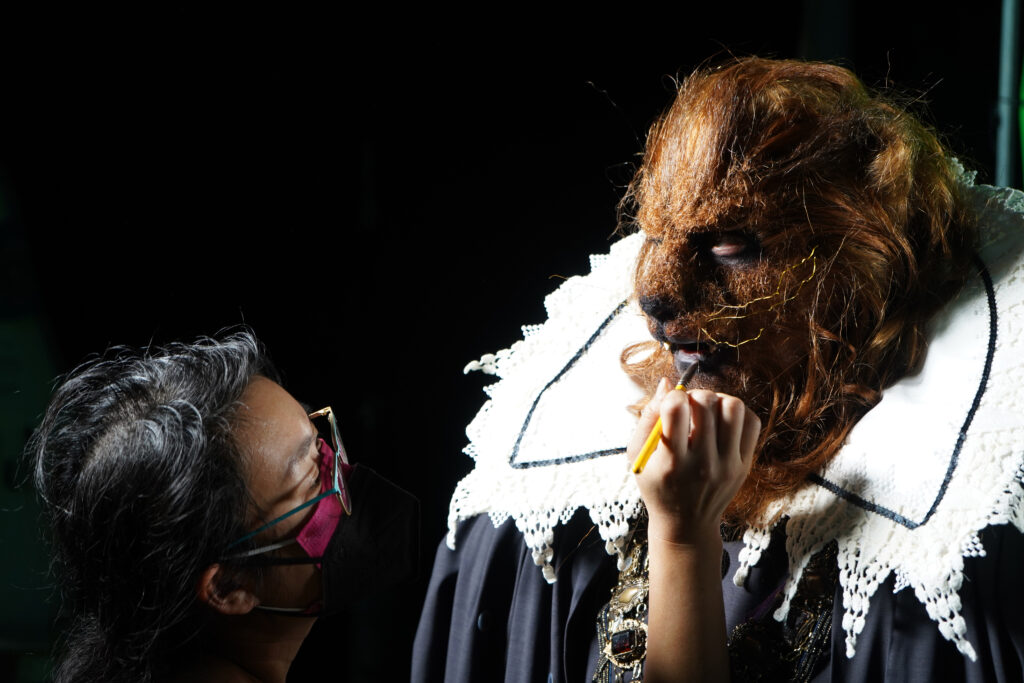 The timeless tale of La Belle et la Bête is a powerful portrayal of transformation made possible by love. At the heart of the story lies the enchanted metamorphosis of a seemingly terrifying beast into a handsome prince. Opera Parallèle’s immersive multimedia synthesis of Philip Glass’s opera and Jean Cocteau’s classic film showcases the talents of wig and make-up designer Y. Sharon Peng, whose stagecraft turns heartthrob baritone Hadleigh Adams (familiar to OP audiences from his performances in Les Enfants Terribles and Everest) into the monstrous Bête, both on stage and on screen.

We asked Adams and Peng to share some insight into the theatrical magic that makes la Bête’s transformation possible.

Has anything in particular inspired your interpretation of the character of la Bête? Have you performed any similar characters before?

In this version of “Beauty and the Beast,” the artist who plays the Beast also plays Avenant (the equivalent of a more likable, helpful Gaston, for those of you who know the Disney version), so in order to find the Beast, I first had to find Avenant. How are they different? What draws Belle to each of them? What do other characters say about them, and are those things true, false, or somewhere in the middle? I will admit, I’ve never actually seen the Disney version, so my Beast in La Belle et la Bête is drawn solely from what Cocteau and Philip Glass give me to work with, my own imagination, and my desire for the audience to see a fully rounded character. I haven’t performed any similar roles, but if we want to get very deep (haha)…in some way, we can all be afraid of showing our true selves to the ones we love, especially when it comes to our romantic partners.

I imagine that extensive makeup and hair could be burdensome and restrictive for a performer; do you think that helps in creating a character like this?

It can become burdensome if you’re not in character. If you’re in character you have to take it as a given circumstance. You’re not an actor, having just gone through a three-hour makeup call anymore, you are this character, this is what your face looks like, and there is no before or after. There’s only the present.

How do you express the nuance of the character, and reveal the interior quality of the man inside the beast, from behind his mask?

Every piece of gesture takes on extra significance. I think, actually, any person alive in 2022 could answer this particular question. For two years, we spent most of our lives wearing masks. When speaking to someone in the street, it was hard to see if someone was tired, angry, or happy, and so, I found that people’s gestures became somewhat bigger, slightly more animated to make up for the fact that half of our faces were hidden. But, at the same time, in this instance of La Belle et la Bête, “I” am not behind a mask. That mask is my face. I just have to learn how to use it, combined with specific physicality to ensure that the truth and subtext of what the Beast says comes across to the audience.

What is it like to act and sing while wearing such extensive makeup and wigs? Are there any particular technical challenges, and how do you address them?

Patience. You have to have a lot of patience, and respect. As the actor, it can be difficult to get through long days in very heavy makeup, prosthetics, and wigs. An important thing to remember is the artistry that went into making you look this good. How fortunate you are to be able to work with some artisans of their craft. Without Sharon’s work, I could not bring this to life. Oh, and practically, protein shakes. You can’t eat in that makeup. It’s impossible. You’d end up swallowing about half a pound of fake hair.

Are you wearing any of the makeup and hair during rehearsals? At what point will you begin to incorporate the physical appearance of la Bête into your performance?

We need to make sure that the staging and music are perfect before we layer on the makeup in the later stages of rehearsal. With the Beast it’s a bit different, though, due to the fact that I have to make sure I can sing everything in the entire opera while wearing the mask/makeup/wig, moving around the set, making sure the mask doesn’t move, ensuring fragments (shards, really!) of fake hair don’t land in my eye. This happened during filming, actually, and was horrifically painful. I have my first makeup call, in preparation for next Thursday’s sold-out opening, this Friday. I’m very excited to work with Sharon again on this character.

What do you hope audiences will take away from your interpretation of la Bête?

That we all wear masks. My favorite line from this opera comes in Scene 7, where Belle arrives at the Beast’s palace. She, somewhat afraid, makes a comment to him that she thinks he’s trying to distract her from his ugliness with all the finery of the palace. He, wounded, replies, “Je suis un monstre . . . mais, mon coeur et bon”—”I’m a monster, yes, but my heart is good.” Which of us haven’t been wounded by hurtful words from a loved one? But he has the strength, and the knowledge of his goodness to not allow his being a “monster” to be his story. His heart shines through with such radiant warmth in that simple line.

Have you created makeup and wigs for any similar characters before?

Yes. I’ve done a production of Disney’s Beauty and the Beast using full-face prosthetics. So I wasn’t very worried about creating a Beast that was manageable for singing.

I understand that OP is replicating the appearance of the characters in the Cocteau film. Did you consider any other inspirations in creating la Bête’s look for Hadleigh?
I tried to keep it to a pretty faithful re-creation of the Cocteau look. I watched the entire film and took screenshots throughout. The Beast reminds me a lot of a big cat, like a lion, both visually and in mannerisms.

What was your biggest challenge in designing/creating the makeup and hair for la Bête?
Laying all that hair on the face took a long time. My favorite parts are his gold whiskers and his fangs that look like they’re in his mouth even though they’re actually attached to the prosthetic/mask. It’s very important to me that, though he’s got a lot of artificial things on him, the pieces still have movement. That’s what makes it seem natural and not alien or disengaged from the world we’ve created.

How long do you expect it will take to apply the makeup and wigs for each performance?
Maybe 20 minutes? I think the application for filming took close to 3 hours (with myself and an assistant), as it was full-face prosthetics and hair lay. However, for the stage performances, I built a reusable mask and mane, which covers two-thirds of his face.

What do you hope audiences will take away from your interpretation of la Bête?

I always think mixed-media provides interesting new venues of artistry. It’s just another way to push boundaries, even more so for opera, which is usually known as a genre that’s pretty set in old tradition. There’s always ways to expand and inject new innovation and inspiration, even if experimental. 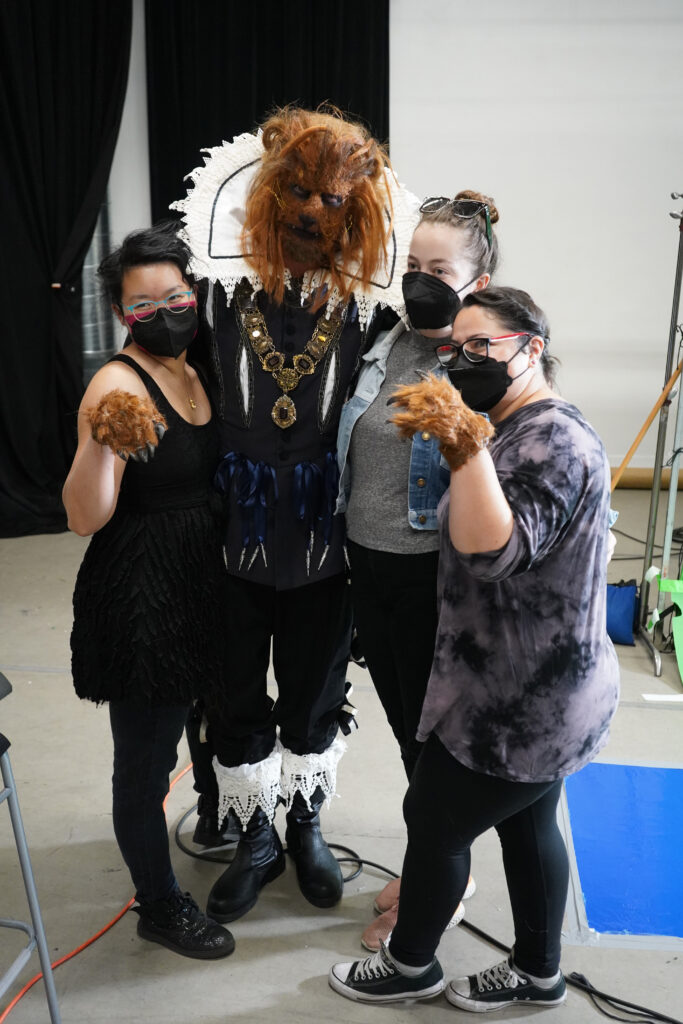