Dead Man Walking: The Reviews Are In! 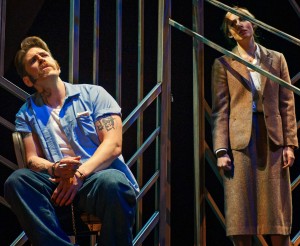 “When we last encountered Jake Heggie’s maiden opera “Dead Man Walking,” during its 2000 world premiere at the San Francisco Opera, the piece came cloaked in all the appurtenances of a big-company production — a starry cast, lavish orchestra, and an expensive, cinematic staging.

But as this weekend’s masterful and remarkably potent revival by Opera Parallèle demonstrated, the piece doesn’t need any of those extras to make an impact. “Dead Man Walking” reaches an audience on its own innate strengths, including the plain-spoken but haunting moral complexities of Terrence McNally’s libretto and the expressive splendor of Heggie’s score.”

Click HERE to read the rest of the article on SF Gate!

“We in the Bay Area are lucky to have this adventurous, intelligent and imaginative company presenting their incomparable productions. The opera world is blessed to have companies like Opera Parallèle that work outside the box of mainstage opera.”

“Opera Parallèle opened the 2015 season with a chamber version of Dead Man Walking at Yerba Buena Center for the Arts in San Francisco last night. Opera Parallèle again makes a compelling case for contemporary works, and the appeal of Jake Heggie’s first opera is obvious. Artistic Director Nicole Paiement conducted a lush and robust sounding small orchestra. Director Brian Staufenbiel’s production is elegant and effective. The main props are a dozen floating rectangular screens, each segmented into smaller shapes made up of metal bars. The use of video projection in the background is tasteful, as is having two supernumeraries representing the murdered teenagers on stage for most of the opera.”

Read the full article on the Opera Tattler HERE!