Dead Man Walking has Legs and a New Production 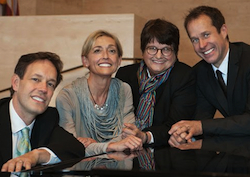 Sister Helen Prejean has been keeping Dead Man Walking alive now for 33 of her 75 years. The story, retold in her 1994 book and in an acclaimed 1995 film directed by Tim Robbins, began for the Baton Rouge-born nun when she became a pen pal, and later spiritual advisor, to convicted killer Elmo Patrick Sonnier, in 1982.

The tale of moral confrontation and spiritual redemption also became the source of one of the most widely-performed operas of the 21st Century, composed by Jake Heggie to a libretto by Terrence McNally, the first opera for both of its creators.

“There’s nothing more intimate than live drama and music,” testified Sister Helen, in San Francisco to help promote this month’s new production of Dead Man Walking by Opera Parallèle. “It’s the fullest form,” she continued, “because it takes you into places in your heart you didn’t even know you had.”

Read the rest of the SF Classical Voice article here.