At The Dallas Opera, The Future of Opera Leadership is Female 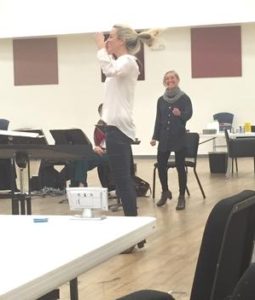 Only two American opera companies with an annual operating budget of more than $1 million employs a female conductor as music director or principal guest conductor. That gender disparity inspired Keith Cerny, The Dallas Opera’s general director and CEO, to establish the Linda and Mitch Hart Institute for Women Conductors at The Dallas Opera (The Hart Institute) in 2015.

The Hart Institute is a two-week residency designed to nurture the careers of six talented female conductors. Four U.S. conductors are selected to audit the program.

“The curriculum is really balanced between the practical side of enhancing their conducting skills, giving them more public exposure, but also this business and career development side too,” Cerny said. The Hart Institute’s third annual residency will take place November 5-19.

Conductors will participate in career advancement seminars about networking and personal branding with Cerny and Alec Treuhaft, retired senior vice-president of IMG Artists.

The conductors will conduct The Dallas Opera Orchestra in two public concerts on November 11 and 18.

Paiement, who is also the artistic director of Opera Parallèle in San Francisco and conducts all over the country, has noticed a shift in the traditional concept of a conductor. “It used to be the conductor was a tyrant on the podium in some ways. I think conductors succeed best when they collaborate. Musicians expect this and women have positive leadership skills,” Paiement said. “I think women are meant to be on the podium. They have a great capacity to lead.”

The Hart Institute’s class of 2017 includes Alba Bomfim (Brazil), Mélisse Brunet (France), Lina Gonzalez-Granados (USA/Colombia), Karin Hendrickson (USA), Carolyn Watson (USA/Australia), and Monika Wolinska (Poland). These participants were selected from 161 applications from 33 countries. The observers are Marie Bucoy-Calavan, Catherine O’Shaughnessy, Maria Sensi Sellner and Hannah Threlkeld. “One of the great things about working as a mentor is you learn from their questions and difficulties,” Paiement said.

Since its inception, the Hart Institute has attracted candidates from around the world. Cerny finds reading the personal statements of international candidates rewarding because it highlights the challenges women face in countries not as supportive of women conductors. “It is a real education in how different countries look at women executives and women leaders,” Cerny said.

Lidiya Yankovskaya, one of the conductors from the Hart Institute’s inaugural class, was recently named music director of Chicago Opera Theater. She credits the Hart Institute with promoting the work of the conductors, giving her greater insight into inner-workings of a major opera company and connecting her with her manager, Ana De Archuleta. “This program has started an important conversation about women in leadership roles in opera,” Yankovskaya said.

Yankovskaya has encountered a concern that a young woman on the podium may not have the experience to lead an orchestra. “Once you get an opportunity and show what you can do, it doesn’t matter if you are a man or a woman or black or white. What matters is the music making,” Yankovskaya said. At annual reunions of the Hart Institute, she appreciates networking with women conductors at the same point in their careers.
Women opera administrators face similar challenges as women conductors. This year, the Hart Institute has expanded, inviting four opera administrators to observe the master classes and participate in sessions about leadership development and navigating the recruiting process for senior level positions. The selected administrators are Anh Le (Opera Theatre of Saint Louis), Stefanie Mercier (Washington National Opera), Sara Noble (Chautauqua Opera Company) and Jennifer Rivera (Long Beach Opera). “It’s really about a case of opening up the field to the most talented people. I’m very much about fairness and a level playing field, but a world where it’s obvious that women are not getting those kinds of opportunity and that kind of support is what I find troubling and that’s why this program is important,” Cerny said.
Paiement argues diversifying leadership will benefit the opera world. “The more variety of people engaging in opera, the more we will get a better representation of what opera should be in the 21st century,” Paiement said.

Yankovskaya has advice for the Hart Institute’s incoming class. “Learn as much as possible and make as many connections with these women from around the world,” Yankovskaya said. “And whatever your dreams or hopes, go for it because it is all possible.”